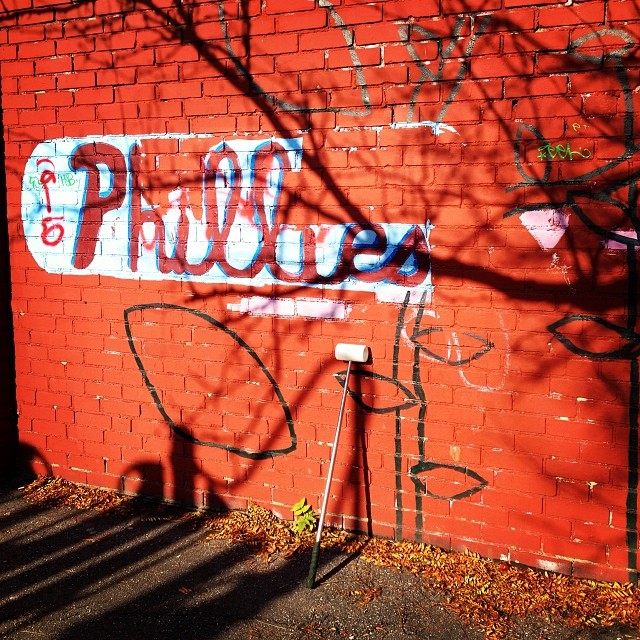 The Saturday after Thanksgiving Alan, Mars and I began the drive down to Philly to meet up with Zac to represent Boston Bike Polo at the one day Philly A/B tournament. After casserole at Mars’ parents house, too many hours on the New Jersey Turnpike, and failed attempts at eating baklava while driving, we arrived Saturday afternoon just in time to participate in judging Lori and Tucker’s chilli cook-off at the court (Lori won- duh).

To my surprise, Philly is such a polo court blessed city that when we arrived at the predetermined location, and the lights never came on, Drew rode to another court across town to find us an alternative spot for Saturday night pick-up. And though that court was slick as fuck, it also had beautifully curved boards, was the perfect size, and located under a highway exchange. We played some awesome pick-up as folks trickled in from Richmond, DC, New York, and other East Coast towns, until we finally shut it down after someone may or may have not broken their nose faceplanting trying to pick up their mallet (but he played the rest of the game like a champ).

The cool thing about a one-day A/B tournament, is that everyone gets what they want: “A-class” slayers get a high intensity one-day gig playing good games, and “B” players get a chance to have more evenly matched (and arguably more fun) games all day. And after this awesome one-day single elim tournament, I may be a single elim convert. We got in 5 or 6 rounds of swiss rounds before we began the elimination bracket, meaning the seedings were pretty accurate, and just about every team got to play each other. Then the elim bracket went pretty fast, but each game was higher intensity because everyone knew it was sudden death. I often feel like teams don’t really begin to try hard until they’re in the losers bracket – and single elim eliminates that nonsense. But I’m just thinking out loud.

Mars, Alan and David (Lancaster) played awesome and came in second in the B bracket (fuck the A bracket, have no idea what went on there) losing to Puff Puff Pass from Lancaster in the finals. Zac, Jackie from NYC, and myself formed team Sparkle Motion and also lost to Puff Puff Pass in the semi’s. Let me just say that if I hadn’t BROKEN MY WRIST in the semi’s, and finished the game more or less stationary in goal on said broken wrist (in golden goal OT might I add!), we totes would have been in the final. JUST SAYIN’. I chipped the hamate bone in my wrist as a result of putting my mallet under my own front wheel going full speed, like a chump. I didn’t even realize my wrist hurt so goddamn much because I’d knocked the wind out of myself and was more concentrated on trying to reinflate my lungs (it’s actually the smallest, lamest injury ever in the history of bike polo). Point being, Puff Puff Pass – we’ll see you again, and next time we will not be denied victory!

The finals ended with only enough daylight left for Mars to get out the rest of his caffeinated energy in two pick-up games, before we packed up the car with an additional passenger – Graham from New Haven – and drove back to Boston. We avoided the New Jersey Turnpike mostly on principle, and because it was the Sunday of Thanksgiving weekend and we’re not complete idiots. And even though the whole adventure took less than 41 hours, and I (kinda) broke my wrist, it was still worth it for the fun road trip, vegan coffee shops, and laid back tournament. -CF