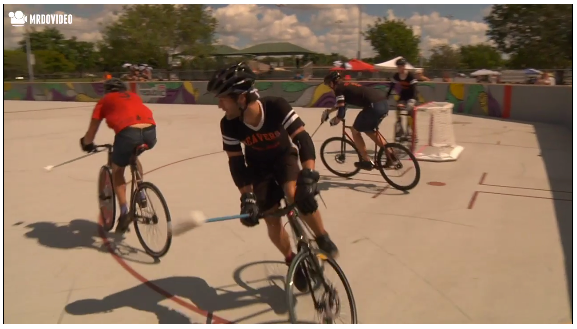 This is how bike polo is meant to be played. Hard-nosed, tough, physical and fast polo.

Here’s what I was watching for:

Ball handling. Koyo is a master at keeping the ball where only he can control it, specifically when he has a lot of momentum. I don’t think I saw him turn the ball over once. Do you know how incredible that is, to play the World Champions and never lose the ball? Teams that control the ball dictate the pace of the game. The Assassins play fast, take hard quick shots, and take a lot of calculated risks playing goal. This works out for them because they are positionally perfect; they don’t get caught behind the net or get beat at halfcourt. And to the Beavers credit, they are not dumb. They play tight, tenacious defense with a relatively soft forecheck and wait for the Assassins to shoot, taking advantage of the Assassins mistakes and creep into the offensive zone. That’s where they excel, pressuring the ball into the net.

Picks and setting up plays. The Beavers do it better than anyone. Whenever a Beaver feels pressure from any of the Assassins, they drop the ball to the last man back and pick that attacker off the ball. That’s phenomenally unselfish teamwork. Mediocre players want to streak down the court and force a shot into a wheelcover every time, but that’s not a great way to score goals. Great players are often patient and calm, waiting for a shot to present itself after the defense breaks down. That’s what happens at 2:55, Dillman slowly snakes his way into Assassins territory, draws Lefty Joe out of the goal with a deke, and shoves a limp dick goal into the net. It’s not very entertaining, but you can’t deny that it’s effective.

Bike handling. This is less important than controlling the ball or setting up picks, but holy shit these kids are great on their bikes. Obviously when you dab, you’re of no use to anyone on the court. This game displays a lot of smart hopping by both teams. Staying upright and turning towards the middle of the court is your best bet for creating or disrupting opportunities on the ball. My favorite example comes at 4:50, where Koyo takes an errant rip at the net and the rebound bounces out to the top of center court. Koyo is totally out of position, but he still uses his momentum to pivot turn on his front wheel and maintain possession of the ball. He then curves around down the left wall and takes a perfect backhand shot, resulting in a goal for the Assassins. Poetry in motion.

Thanks to Mr. Do for posting these incredible games on the internet and giving me something to do for an hour. I can only hope that some Boston players get on the internet so I can make fun of them, too. -ZS